Being proud of and propagating your cultural heritage.

First of all apologies for not keeping to the “post every day” rule. I had short cases on Tuesday and was up till 4am the night before prepping for it : Was pretty shattered last night so instead of studying I chose to play Magic with a friend for hours, get Nandos for dinner, and watch TV shows until I went to bed early. Recovered since but study is boooring.

Anyway, today was Hangul Day (한글날), yay!!! Hangul is the Korean alphabet and was invented by King Sejong the Great (세종대왕) 567 years ago. It is a beautiful written language that was designed scientifically and logically to better represent sounds, making it easier for common people to learn. To celebrate it, I made a small event on Facebook where I wrote my friends’ names in Korean haha. One friend jokingly said “Arnold Schwarzenegger”, so I happily obliged… along with a sketch 😛

In Genesis from the Old Testament of the Bible, it is said that God created the world in six days and rested on the seventh. But the system of a seven-day week can be found in many other cultures and religions. The origin of the seven-day week system is ancient Babylonia. The Babylonians believed that every seventh day was one of misfortune, with 7 having the significance that it is the largest single-digit prime number and the number of heavenly bodies known at the time (sun, moon, five planets). This was passed on to the Jewish people who made the seventh day the Sabbath. This was then adopted by Catholics in Rome and in 325AD, it was officially decided at the Concilium Nicaenum (official council that was held to vote for the official religion of Rome) that every week would be seven days long.

There is also a reason for assigning a heavenly body to each day (Monday = Moon, Tuesday = Mars, Wednesday = Mercury, Thursday = Jupiter, Friday = Venus, Saturday = Saturn, Sunday = Sun). At first, the order of the days was the same as the order of heavenly bodies by their distance from the Earth: “Saturn, Jupiter, Mars, Sun, Venus, Mercury, Moon”. This was then cross-referenced with the astrological 24-hour system of planetary hours, resulting in a new order of “Saturn, Sun, Moon, Mars, Mercury, Jupiter, Venus”. Because of this, the week started on Saturday in ancient times. It was only during Roman times when the week was changed to start on the Sunday, with Sunday becoming an official day of rest.

The Romans named the days after the heavenly body assigned to that day. For example, “Sunday” obviously comes from “Sun”, with the same applying to Monday and Saturday. This system is used in Korea and China, where each day is labelled according to the assigned planet. For example, Thursday is 목요일(mok yo il) in Korean, where 목 means wood, with 목성(mok sung) meaning Jupiter.

Interestingly, the Norse god assigned to each day correlates with the Greek/Roman god assigned to it. For example, Thursday is “Thor’s day” and also “the day of Jupiter”. Jupiter is the Roman king of gods (same as Zeus from Greek mythology) who uses lightning, while Thor is the Norse god of thunder.

Not every country calls each day a meaningful name. In China, Monday is simply 星期一(xing qi yi), or “first star period”, with each day after that being one number higher (Sunday is specially called 星期日(xing qi ri), where the number is replaced by the character for “Sun”). Although China used the same system as Korea and Japan based on 음양오행설(eum yang oh hang sul, system of Five Elements and Yin Yang), the days were renamed with the simplification of the language.

Han Suk-Bong is a famous writer from the Joseon Dynasty (Korea during 14th to 19th century), who was praised as “the master writer of the East” even in the Ming Dynasty (China during 14th to 17th century). His writing and calligraphy were partly thanks to his inborn talent, but also because of his intense training and practise throughout his life. There is a famous story regarding his training.

Han Suk-Bong practised calligraphy since a young age by himself, practising every day. The villagers all praised his talent and his mother sent him to a famous temple to study. After four years of studying, Han missed his mother so much that he sneaked out during the night and returned home. When he told his mother that he there was nothing more for him to learn, she told him to turn the lights off and said: “I will slice rice cakes while you write, then we will compare our skills”. After the two silently did their best work in the darkness, they turned the light on and it was evident that Han’s letters were all crooked and unsightly while his mother’s rice cakes were perfectly sliced in even thickness. Han deeply repented his arrogance and realised there was so much more to learn. His mother told him off and told him not to set foot in the house again until he could write perfectly even with his eyes closed, just as she could slice rice cakes perfectly. Thanks to his mother’s passion for his education, Han became one of the most well-known masters of calligraphy and literature in the Far East.

The best type of parent is one who identifies a child’s natural talents early on and helps them develop those skills. If the child becomes lost, loses their way or fall into the pit of arrogance believing they are the best, it is the parent’s duty to correct them. The moment you believe that there is nothing more to learn, you become a failure.

This is the shortcoming of the English language, where so many letters can be pronounced in various ways depending on the context of the word. This problem cannot be found in languages such as Korean where every Hangul character can be pronounced a set way, as they each represent a certain sound.

Therefore, there is no other way of saying “moolgogi (물고기, fish in Korean)” other than just that. This is why the Korean Hangul is a far superior and more logical method of writing than the English alphabet.

The Taegeukgi is the official flag of the Republic of Korea. It was chosen as the official flag of Joseon by Emperor Gojong in 1883 and has been used as the flag for South Korea since 1948. The Taegeukgi is an extremely symbolic flag that expresses the values and ideals of the Korean people while also containing the sorrow caused by the great tragedies in modern Korean history: the 36 years of Japanese colonisation and the Korean War. Even before Korea was founded, the flag was used in protest of the Japanese Empire and for the independence of Korea (especially in the famous March 1st movement). Much like Hangul (the Korean alphabet), the Taegeukgi, designed by Park Young-hyo and commissioned by Gojong, is a very scientific and mathematical flag. Let us analyse each part of the Taegeukgi.

The Taegeukgi is composed of a red and blue taegeuk symbol (“yin(eum)-yang symbol” is technically a misnomer) on a white background, surrounded by four black trigrams (4괘, sa-gwe). The white background symbolises brilliance and purity and the Korean people’s traditional love for peace. The taegeuk symbol symbolises the harmony of eum (blue) and yang (red), an imagery of the interaction between the two extremes and the natural rule of continuous generation and progress seen in the universe.

The trigrams in each of the four corners is called geun gon ri gam (건곤리감, 乾坤離坎) in order and each trigram symbolises a certain characteristic of everything in the universe.

As you can see, the taegeuk is far more scientific and deeply philosophical than simpler flags such as those symbolising the Sun God (Japan), the number of states (USA) or a composite of three different flags (UK). It is the ultimate flag that prides the Korean people’s wisdom and advanced culture. 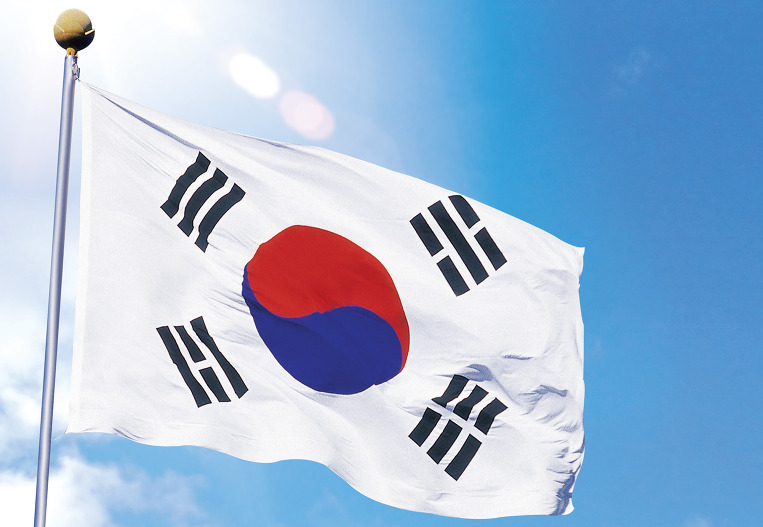 Most Westerners are familiar with Johannes Gutenberg, who invented the printing press in 1450 which allowed the mass-production of books, namely the bible. In fact, the printing press is thought of as one of the crucial factors that triggered the Renaissance in Europe.
However, what most people do not know is that the movable type – a printing machine where individual letters can be rearranged and reused – was invented in Korea during the Goryeo Dynasty two centuries before Gutenberg.

Before the movable type, Buddhist monks would carve out wooden blocks so that they could copy out religious texts with ease. But as this involved the monks having to carve out the entire text (often very long), it was extremely labour-intensive and everyone sought an easier method of mass-producing texts. The concept of the movable type was experimented with throughout the centuries, but it was found that woodblocks would wear out too fast. Although metal was the obvious choice, the technology was not developed enough to produce the fine letters.

In 1234, a Korean man called Choe Yun-ui finally devised the technology to invent the first metal movable type in the world. The process was very complicated, involving the making of durable clay moulds to hold the molten metal without breaking.
This was revolutionary as it meant that texts could easily be printed as all the printers had to do was rearrange pre-made letters in order rather than laboriously carving each one out. Metal movable types are also extremely durable and give a very clean print, unlike the wooden counterpart that tends to wear out or smudge. The metal movable type allowed for the mass-production of books which greatly boosted Goryeo’s culture and education within the poorer classes.

Korea was the leading innovator in the printing industry throughout history, with the earliest woodblock prints dating back to 751. The motivation to develop this technology was partly thanks to Buddhism. To ensure that Buddha’s teachings could be spread far and wide, Buddhist monks worked day and night to produce these texts. This was a critical job during the 13th century when the Mongol Empire was rampaging through the whole of Eurasia. As military force was insufficient to repel the invaders, the people turned to spirituality for power. Furthermore, due to the destructive nature of the Mongols, it was crucial to replace damaged texts to ensure that precious cultural heritages would not be destroyed. This was the main motivation for the creation of the metal movable type and to this day we can see the evidence of the state-of-the-art printing device in books from the 13th and 14th century.

One limitation still remained with the movable type – Chinese characters. At the time, Korea still used Chinese characters to record the Korean language (similar to how Chinese characters can be transcribed in pinyin form). As there are literally tens of thousands of characters, a massive amount of individual types had to be produced.
This problem was solved by King Sejong the Great of the Joseon Dynasty, who invented Hangul – the Korean alphabet. Hangul only contains 24 letters and is extremely logical in its construction, ergo it was a perfect system for recording language. It also meant that much less individual types were needed, making the printing process even more efficient.

Although the 20th and 21st century saw the Western Hemisphere leading science and technology innovations, it is important to remember that the East dominated the field for millennia before.